Share All sharing options for: The Dig: Kicking Off Kelsey Moore Week Edition

Miner volleyball star Kelsey Moore is set to represent the State of Texas in the Miss USA Pageant which airs Sunday night on NBC.  Expect some daily links following Kelsey's pursuit of the title.  Hey, it's baseball season!  The Rush is your best Miner and C-USA Round-Up.  And, it's not even close.   In The Dig.

In Good Company:  Rivals.com says three schools will have a 1,000 yard rusher, passer, and receiver.  You know UTEP's one of them (Trevor Vittatoe, Donald Buckram, and Kris Adams).  The other two?  Try Oklahoma and the Washington Huskies.

Dr. Saturday at it Again:  Dr. Saturday has a "way too early" preview of the 2010 UTEP Miners.  Parts of it are funny, and amazingly, they don't mention the Price/Alabama scandal.

If you followed last year's Mid-Major Monday columns, you might remember us pulling our hair out week by week in a futile effort to pin the Miners down. It will serve our purposes best to simply recap the first six weeks, in which the Miners: Lost to Buffalo by six, fell to Kansas by 27, were butchered by Texas by 57, upset No. 12 Houston by 17, and lost to Memphis by 15, which is about where we gave up trying to consider them as anything beyond an agent of chaos.

He Sounds Skeeered:  Tony Barbee sounds like he's scared to play UAB.  You're at Auburn, Tony.  Man up.

A: I don’t know. I think I’ve had my fill of UAB (as UTEP coach). I have a great relationship with Mike, with Donnie (Marsh), with Wes (Flanigan), his entire staff. Mike’s a great coach. He does a tremendous job. That being said, I played him for the last four years. I don’t know if we need to play anymore.

Duke Wins Again:  Duke Keith has a YouTube Channel full of great Miner interviews and press conferences.  I'll be sure to add it to the "Miner Links" widget on the left sidebar.  Know any great Miner sites?  Post 'em in the comments.  Here's a nice clip he got of Tim Floyd discussing the Desmond Lee signing.  He could play some point guard, good to know.

Lost in Translation:  El Diario in Juarez has two articles up on Kelsey Moore's pursuit of the Miss USA crown.  I won't pretend to have any idea what this comment means.  But, if you click the link, you'll find some nice looking Kelsey Moore images the Diario found.  I love Juarez.

Quick Study:  More Kelsey Moore?  Why not.  She sat down with Nora Orozco at Borderzine.

Although she entered the El Paso pageant with only one month to prepare, she astonished the pageant community by her intense focus and uncompromising determination to learn fast. 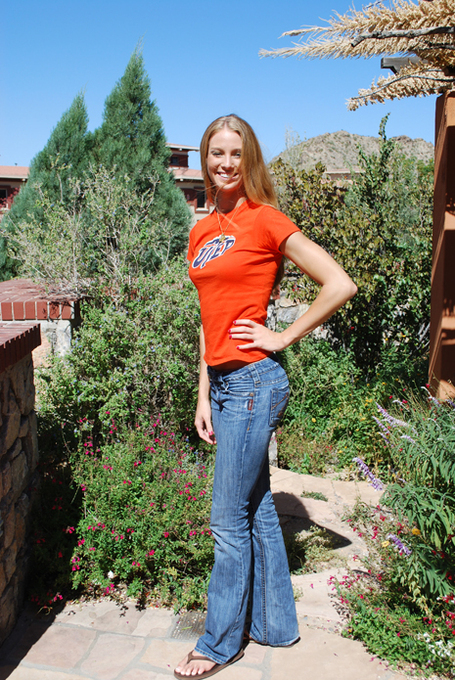 Rematch:  The UTEP softball team will be the 6 seed in the C-USA tournament.  They will take on the 3 seed, UCF, in the first round on Thursday.

Time to Kill:  Rice baseball skipper Wayne Graham likes to read message boards.  I hope he likes my catchy "Fried Rice" headlines.  By the way, the Owls are ranked #25 in the country and are a lock to make a CWS regional.

"I noted on our message boards that some people questioned the starting of J.T. Chargois," Graham said after the game. "And I also note what he did compared to the rest of the people we put out there. For those who criticized that move."

Keeping Ahead:  AD Keith Tribble talked realignment.  The gems of this article are in the comments.  Some UCF fans apparently think the only thing stopping the (Golden?) Knights from getting into the SEC is the Florida Gators.  Apparently, Urban Meyer is terrified of George O'Leary and UCF's facilities.

OS: Have you heard anything new about potential conference realignment this offseason? Tribble: I think the volume in terms of who’s going where and what’s going to happen has been turned up very loud. And really, most of us are in a wait and see position. It will impact all conferences in some way depending on how the Big Ten moves.

Bout Time:  Donnie Jones, the new UCF basketball coach, finally scraped together the cash to pay Marshall the rest of his buyout.

Minus 1:  Cam Miller has decided to transfer from the Marshall basketball team.  He's off to Mountain State University.

Miller played sparingly for the Thundering Herd this year, averaging 3.2 points per game. But he suffered through some nagging foot injuries that kept him out of 10 of the last 18 games for the Herd.

We Are Marshall:  The Randy Moss/Chad Pennington days were a long time ago.  But, do you remember how good Marshall was?  Remember when they knocked off #6 Kansas State?  Herd fans do.

Bourbon Please:  The Orlando Sentinel thinks Tulane is the worst football team in the C-USA.

Most of the starting offense returns, but is that a good thing when Tulane averaged 16 points a game last season? Tulane was blown out in seven of its nine losses, and there is little help on the horizon. Nothing has gone right for coach Bob Toledo since he took over the program and he finds himself on the hot seat going into 2010.

Zack Langer was one of the top running backs in the state last season, rumbling around, over and through opposing tacklers as a member of the Jenks Trojans. He'll soon be taking his act to the college gridiron as a member of the Tulsa Golden Hurrricane.