Miner great Bob Kitchens is retiring, El Paso, Inc. comes out of nowhere with a solid financial breakdown of the UTEP basketball program, Marshall's best defensive back has been arrested for the third time (3rd Time!) in the last 13 months, and more in the Dig!

Money Maker:  El Paso, Inc.'s Sito Negron has a nice breakdown on the specifics of Tony Barbee's incentive laden contract.  Bob Stull used these mechanisms to push a $233,000 base salary to well over $300k.  These incentives should be repeated, and possibly improved upon, in Tim Floyd's deal.

In the last year of his contract, Barbee received a base salary of $233,000, plus a bonus of one month’s pay for hitting these benchmarks: coach of the year in Conference USA; conference regular season champions; and an appearance in the NCAA tournament, for which he also received $5,000 bonus. That amounts to more than $63,000 in bonuses, pushing his compensation close to $300,000. And that’s before adding incentives like $1 per gate ticket sold, and $20 per season ticket sold over 4,500. Barbee also was to receive the use of two vehicles and a country club membership; $80,000 from donations made to the school by third parties to be paid for him to make public appearances; and $1,500 from third-party donors for clothes.

Old Enemies:  Houston Alumni Kevon Kolb and former Miner Quintin Demps have a long history against each other.  Now, they're teammates in Philadelphia.

(Kolb) was picked off twice in a game in college by current teammate and former UTEP safety Quintin Demps. The second pick ended the game in double overtime.

Losing a Legend:  Bob Kitchens is retiring after this track season.  This weekend is the UTEP Invitational, and it will be his last home tournament.  There will be lots, and lots, of track stars competing.  Tickets are only $7.00 to attend and see some of the best athletes in the world (including Blessing Okagbare).

Bob Stull had more on Kitchen's retirement.  He has had incredibly consistent success in El Paso.

He has coached over 200 All-Americans, including 24 national champions, since coming to El Paso in August 1988. He has directed the Miners to 17 conference titles, including the women’s indoor crown this year. To say that he will be missed would be quite the understatement. We’d like to thank coach Kitchens for his tremendous service to UTEP and the Miner athletic program. On Saturday, I invite you out to Kidd Field for the final home meet of coach Kitchens’ career. The annual UTEP Invitational features a star-studded cast of Olympians and NCAA champions.

Center of the Action:  Eloy Atkinson and Tanner Cullumber are in a battle for UTEP's starting center spot.  Bret Bloomquist has the story.

He had been the starting center, but Eloy Atkinson, who started at the end of last season after Cullumber was injured, took that slot and Cullumber moved a spot to his right.

Two Steps Forward, One Step Back:  Pierce Hunter and Alex Solot are back with the team, but Trevor Vittatoe will not suit up until the fall.

Vittatoe was back on the field Tuesday with his teammates for the first time this spring after being suspended for an undisclosed violation of team policy. Receiver Pierce Hunter and offensive lineman Alex Solot also returned from suspension Tuesday.

Catorce:  MSN's Mike Miller thinks UTEP will be ranked #14 in the country next season in basketball.

Where to place a 26-7 team that owned C-USA and returns nearly every player (Derrick Caracter declared for the draft) but loses its coach? Right here. Besides, the defense might get even better with Tim Floyd around.

"The thinking is it’s probably best for us to have it rather then let it fall into the hands of someone where we don’t know how they’re going to use it," Villa said.

We Are Incarcerated:  Marshall's DeQuan Bembry and T.J. Drakeford were both arrested in Huntington.  Bembry is considered the teams best defensive back.  He's accused of, wait for it, assaulting an officer!  Drakeford also assaulted an officer!   Bembry has been arrested three times in 13 months.  That is not a typo.

Cornerback DeQuan Bembry — the team’s best defensive back — and fellow defensive back T.J. Drakeford were arrested according to court documents.......Bembry is accused of verbally assaulting an officer who was attempting to clear the downtown bar. Drakeford is accused of striking an officer in the chest.......Both players were in custody and bond was set at $15,000 for Drakeford and $5,500 for Bembry.......It is Bembry’s third arrest in 13 months.

No Comment:  Hassan Whiteside apparently has a grudge against the Huntington area media after they were critical of his play late in the season.  Remember when Derrick Caracter owned him in the final minutes on the road?  I guess I won't be getting an interview anytime soon.

So, Hassan Whiteside is sort of officially going pro (Click this link!). I say "sort of" because he refuses to talk to the media after "we" (Hi Landon!) were critical of him late in the season. His family has confirmed, however, that he will not return to Marshall.

Welcome to Nola:  Tulane has hired the Citadel's Ed Conroy to replace the fired Dave Dickerson.

A person familiar with the decision says Citadel coach Ed Conroy has agreed to fill the vacant coaching position at Tulane. Conroy has been head coach at Citadel for four seasons. He will replace Dave Dickerson, who resigned last week after five seasons with the Green Wave. Tulane was 8-22 in 2009-10.

Onobun, a former University of Arizona basketball player who transferred to UH this past season, wowed the scouts by turning a 4.48 time in the 40-yard dash. The scouts measured him at 6 feet 5½ inches tall and 252 pounds, with a 37½-inch vertical jump. Onobun had the best vertical jump and broad jump (11-1) and tied for the best shuttle time (4.15, matching receiver Tim Monroe) of the 12 players who worked out for the scouts. 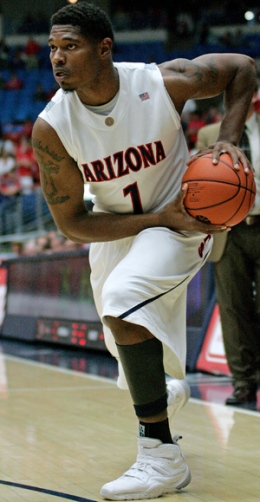 TV Time:  The Cougars will have six games on television next year.  Two on ESPN (including their early game with UTEP) and four on CBS College Sports.

The offensive line is a work in progress, too, after the dismissal of second-team All-C-USA right tackle Jarve Dean. The Cougars are looking at Roy Watts at right tackle, backed up by redshirt freshman Ralph Oragwu. Jacolby Ashworth, who had been penciled in at left guard, is at left tackle. Jaryd Anderson has slid into the left guard spot manned last season by Jordan Shoemaker, who is the starting center.

A Good Read:  Scott Cacciola of the Memphis Commercial Appeal has a nice article on incoming Tiger recruit Joe Jackson.  The McDonalds All-American is definitely getting the star treatment.

A night that began with Jackson barking "My Mound! My Mound!" after his first basket closed with a congratulatory handshake from University of Memphis coach Josh Pastner ("Joe's just a winner," Pastner said) and a business card from former NBA star Greg Anthony ("That's my home number," Anthony told him).