Double B shines some light on a few UTEP NFL Draft hopefuls, Miner students are voting as we speak on an initiative that will add barrels of cash to the school's athletic coffers; the women's basketball team signs two stars (including a local product); Oh, and a star Memphis Recruit is NOT HAPPY with Josh Pastner's lackadaisical recruiting effort.  That hurts, Josh.  In The Dig.

Great Catch:  TUTO's Pablo Villa had a great post on UTEP's proposed athletics fee.  I didn't catch that Bob Stull started tossing out "Tier 1" status as a motivating factor for students to pass the initiative.  Athletics are great, but don't expect UTEP's US News & World Report ranking to go up because Tim Floyd got $700k a year instead of $400k.

I also don’t think it’s fair to throw words like "tier one" into this subject. UTEP is not going to achieve tier-one status because the Miners go 9-3 on the football field next season or any other season. It’s a little misleading to say, as Bob Stull did on Phillip Mena’s report on KTSM on Wednesday, that "we’re aspiring to be a tier-one institution" in conjunction with this vote.

Give Jeff a Chance:  Bret Bloomquist caught up with some former Miners who are looking to catch on with an NFL team.  I will have an NFL Draft open thread up later.  I'm really pulling for Cornelius Brown to hear his name Saturday.

"I'm ready, I just want a chance," Moturi said. "I got noticed as the (Texas vs. The Nation) All-Star Game. Most people didn't know much about me until then. Teams have told me if I don't get drafted they want me as a high free agent so I'll have an opportunity."

Out of the Den:  Kyyote, a.k.a. Craig Evans, has a piece up at the Rivals site on UTEP's offensive line transitions.  Good info. (No $).

Gone from last year's offensive line are starting left tackle Mike Aguayo, and starting left guard Cameron Raschke. Some other players who graduated and were a big part of the O-line corps, are center Daniel Garcia, and Right guard Colby Meek. Brit Mitchell, a 6' 7" transfer from OU suffered a career ending injury, and 6' 8" Deryck Beverage is no longer with the team. But don't let that mislead you. The offensive line being readied for this season's campaign looks to be just as solid, or maybe even better.

Always Good:  I like when I get an alert on a UTEP alumnus doing good in any field.  Mike Villa, a longtime Miner student equipment manager, is now the top dog at UTSA.

Let it Die:  Someone dug up a video of Bob Stull explaining the infamous "5th Down."

Love the Drake:  UTEP track is up at the legendary Drake Relays.  It's the latest stop along the Bob Kitchen's Farewell Tour.

Bad Josh:  The #1 recruit for the class of 2011 in the Memphis area is not pleased with Josh Pastner's lazy recruiting effort.  The kid is a lifetime Memphis fan, so for him and his coach to make these public statements shows something has to be really wrong out there.  If you dislike Memphis, read this.

"I just get a lot of calls (from Memphis)," Thomas said. "That was kind of the thing that Coach J was trying to bring to their attention, that they're so close that they should be recruiting me harder by coming to the school every so often."

Tough Test:  Marshall will play Ohio State in football on the Big 10 network next year.  At the Horseshoe.  I really hope the Herd keep it close.

Community Outreach:  Marshall coaches and staff are literally taking  a caravan bus tour across the state to give fans a chance to meet their new coaches.  Virginia Tech and West Virginia are doing it too.  Good for Marshall to make an effort to keep pace.

For Marshall, it will mark the return of the Tour to Four Seasons Country after a one-year absence, providing local Thundering Herd fans with the opportunity to meet what is a relatively new collection of administrators and coaches.

Senior Brian Anderson is the incumbent and remains the No. 1 option at the moment. Don't lose sight of that caveat, because freshman A.J. Graham is having, by all accounts, a very productive spring and seems to be closing that gap. And both face an immediate challenge in May, when Willy Korn brings his Clemson degree and some starting experience to Huntington.

Hot Seat?:  When you take a closer look at Doug Wojcik's tenure at Tulsa, you see that he really hasn't done much of anything despite having some stud players.  Wojcik has a few, and I mean a few, marquee wins, but he can't beat Memphis and he can't get the Hurricane into the tournament.  Wojcik might be in a much tougher spot than people think next year.

Tulsa is just 4-24 against teams that finished the season in the RPI's top 50 (collegerpi.com) under Wojcik. Of the 24 losses, 10 came to Memphis. The Golden Hurricane's only triumphs came in a 2009- 10 home win over Oklahoma State and 2008-09 victories over Texas A&M and UAB (which happened twice). Attendance has sagged in recent years. Season ticket sales were at 6,659 in 2002-03. This past season -- despite heavy promotion including a message "this is the year we have been waiting for" -- sales hovered around the 4,300 mark. In Wojcik's first season (2005-06), season ticket sales were at 4,949. The number "zero" next to NCAA Tournament appearances weighs heaviest to detractors. Cunningham has heard them in person and via e-mail.

In the Webb:  UAB fans are hoping that the spring game provides some clarity in the QB battle between David Isabelle and Bryan Ellis.  Joe Webb is a tough act to follow.

The game will hopefully give us a bit of insight in to who may end up at quarterback for UAB. While most would assume that David Isabelle would pick up where the dynamic Joe Webb left off, that isn't such a sure bet. According to Birmingham News beat-writer Steve Irvine, Isabelle will share first team QB duties on Saturday with junior Bryan Ellis.

Mustang QB:  Former Burges High School QB John Skelton is flying up the draft boards of several teams.  Here's wishing the Fordham QB a good draft day.  El Pasoan's got to stick together.  It will be great for local high school coaches to say a local kid is an NFL quarterback.

That's gradually changing. The Jets, Broncos and Redskins have all sent reps to Fordham, and the Colts and a handful of other teams have requested credentials to scout the squad during the season. 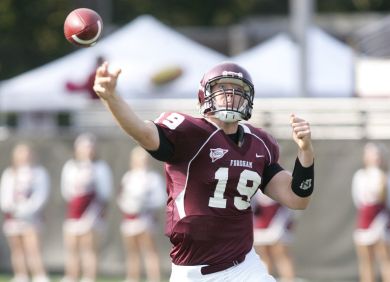 Everyone's Scared:  You would think that Boise State would feel pretty good about conference expansion.  The Bronco's should be at the top of some other league's replacement lists, right?  The thing is nothing is guaranteed and the Idaho Statesman is worried the Bronco's might be left holding the bag in the WAC.

Boise State's best hope is for limited expansion and an invitation to a still-intact Mountain West Conference. The Broncos second-best bet is for mild upheaval that puts them in the same league as BYU and Air Force, either an expanded WAC or Mountain West. Massive movement is bad for the Broncos and Idaho.

The Commish Makes an Appearance:  Britton Banowsky should be a lot more visible than he's been right now.  He did make a cameo in this NY Times article on conference expansion and the BCS meetings.

"This is a fairly dynamic period in my experience in college athletics," Britton Banowsky, the Conference USA commissioner, said. "You have so many things that are out there on the horizon. All of those things are fairly dramatic in terms of how the future of college athletics will be shaped."