The Dig: Tim Floyd Throws His Weight Around Edition

Share All sharing options for: The Dig: Tim Floyd Throws His Weight Around Edition

Michael Haynes:  The Newest Miner.  Let's take a look around the C-USA! 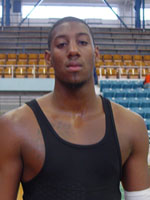 Head of the Class:  First, Tim Floyd kept Tony Barbee's prized recruit, John Bohannon, in UTEP's 2010 class.  Then, he convinced a top 30 national recruit, Rashanti Harris, to come to the desert.  Then, he went out and signed Chicago area star Michael Haynes who had offers from Big 10 and Big East powers. Along the way, he hired his longtime comrade Phil Johnson and a master recruiter, William Small.

At Floyd's introductory press conference, he said this:

I tend to work tirelessly to try to put together a championship-level program here. What championship level am I talking about? Well, I think the only one you all can relate with is '66. Conference championships probably don't mean much to you. I've won a few of those along the way. They probably don't mean as much to me anymore. So we'll be trying to put together a squad and a team that can go win it all. Everybody might say that's crazy, you can't do that today. Tell Butler that right now. Tell George Mason that four years ago. I know it can happen and I know it can happen here.

"Part of my familiarity with taking this job is I have a sense of where to recruit here. I don't need to go look at history manuals to find out where the players have come from. I'm familiar with the facilities, familiar with everything

Chills.  I declared Floyd's performance a "Homerun" because for the first time it sounded like we had a coach who truly wanted to win at UTEP and who wasn't afraid to compete with major programs for recruits.  Michael Haynes could be playing in the Big 10 next year.  He might have had a shot to play at national champion Duke.  Yesterday, he became a UTEP MIner.

Late to the Party:   The Times briefly mentioned the Haynes commitment.  Rivals($) has confirmed that Haynes has signed with UTEP.

Rashanti Harris, a four-star prospect out of the 2009 class, failed to qualify academically to play at Georgia State but has now resurfaced as a signee with UTEP. He could help give Tim Floyd's Miners a formidable front line next season.

Some People Hate Duke More than they Like Themselves:  Duke had real interest in Haynes.  Don't believe me?  You can taste the salt over at this Duke fan site.

Back to the Gridiron:  The Chaos of Tim Floyd's whirlwind recruiting tour has taken my focus off of the football squad.  Who's going to the Orange & Blue game? Mike Price wants to rally the fanbase.

"We want it to be exciting," UTEP coach Mike Price said. "We want our players to have fun, and we want our fans to enjoy it and leave the stadium saying, `We can't wait to be back for the Arkansas-Pine Bluff game (on Sept. 4)." The Miners will be divided into two teams with a draft on Wednesday. Rosters will be announced on Thursday. Quarters will be 12 minutes long, and tackling will be in effect on all offensive players except the quarterbacks.

A Man Named Amy:  Bret Bloomquist is doing a heck of a job covering UTEP's spring workouts.  Today, he has nice feature on the teams safeties.  Mike Price likes having a veteran lead the way.

"The thing I like most about Braxton Amy is he's out here everyday bringing leadership," coach Mike Price said. "Braxton Amy is one of the best defensive backs in the country."

Well Deserved:  Randy Culpepper and Blessing Okagbare have been named the UTEP Male and Female Athlete's of the Year.  Stacie Townsend had to have been up there, as I'm sure Donald Buckram was.  But, it's hard to argue with the C-USA MVP Culpepper and one of the most dominating forces in the world in women's track.  We are very lucky to have some incredible Miners still wearing uniforms right now.

Basketball’s Randy Culpepper and track & field’s Blessing Okagbare were recipients of the UTEP Male and Female Athlete of the Year Award, respectively, at the 36th annual "Dinner With The Miners" banquet on Tuesday night at the Wyndham El Paso Airport.

A Good Question:  ESPN.com is counting down the "historical hypotheticals of 2010."  They ask, what if Tim Floyd's (alleged) handshake never happened?  The ripple effects are interesting.

What if Tim Floyd's (alleged) handshake never happened? Of course, Floyd argues that his alleged $1,000 handshake with O.J. Mayo handler Robert Guillory didn't happen, but it doesn't matter -- the aftermath did. Floyd resigned from USC and athletic director Mike Garrett still self-penalized the basketball team in the hopes of preserving the football program's safety from NCAA regulators. So what if the Yahoo! Sports story that implicated Floyd was never published? Floyd stays at USC. Prized frontcourt recruits Noel Johnson and Derrick Williams stay in Los Angeles. Kevin O'Neill remains an assistant with the Memphis Grizzlies. The Trojans likely avoid the morass of trouble that beset their 2009-10 season and, on the strength of their recruiting class and senior transfer Mike Gerrity, make the NCAA tournament in a weak Pac-10.

We Were in the Running?  It seems like Tim Floyd and only Tim Floyd knows who he's recruiting right now.  Local sites never reported that Floyd was very close to signing Demetrius Walker.  Walker, an Arizona State transfer, chose New Mexico over TCU and UTEP.

According to an Arizona newspaper, Demetrius Walker is transferring from Arizona State to the University of New Mexico. Walker is a 6'2" guard who played in 23 games with the Sundevils last season. Walker visited UNM this past weekend. The freshman was also considering TCU, UTEP and Hawaii

A Good Hire:  Ohio State has hired former Tulane head coach Dave Dickerson to become an assistant basketball coach. I think Dickerson's a good coach who never had any institutional support at Tulane.

Core Unit:  Kevin Sumlin may have lost OC Dana Holgorsen, but his key offensive skill players are all back.  Houston's spring game is on Saturday.

The core of the nation's top-ranked offense is largely intact. Quarterback Case Keenum, running backs Charles Sims and Bryce Beall and receivers James Cleveland, Tyron Carrier and Patrick Edwards have little to prove, so the coaches have tried to keep them out of harm's way. At the same time, UH is trying to install the attacking 3-4 system of new defensive coordinator Brian Stewart.

No Hurricane Up Front:  Tulsa's weak spot last year was undoubtedly it's offensive line.  The Tulsa World, after the spring game, can't figure out if it's any better.  At all.

It was hard to tell Saturday. The Hurricane allowed 10 tackles for loss and periodic pressure on the quarterbacks. Tulsa allowed 46 sacks last year, 118th out of 120 teams in the top division.

Dangerfield:  The World did have some good news to report, the Hurricane received a commitment after the spring game.

Friday Night Lights:  This is to crazy not to mention.  A high school in Dallas is building a new football stadium.  Nothing unusual about that, right?  Well, the price tag is $60 MILLION DOLLARS. This will undoubtedly mean that yet another high school stadium will soon be nicer than the pile they have up at NMSU.

Just in case you forgot how important high school football is in Texas, the residents of Allen will soon have a $59.6 million stadium that will leave no doubt. Next month in the booming north Dallas suburb, ground will be broken on a state-of-the-art, 18,000-seat facility that will feature two decks, a video scoreboard, four concession stands and 12 restrooms. It is scheduled to open in the fall of 2012.