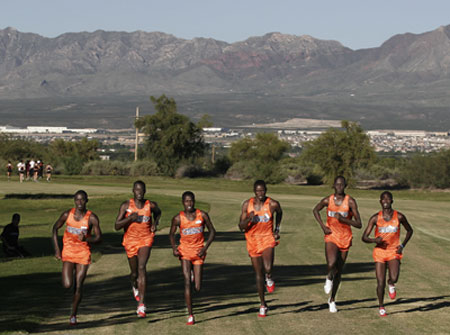 Bob Stull didn't take long to replace retiring Miner legend Bob Kitchens.  Today, he named longtime Mike Laaksonen as his replacement. Laaksonen was an assistant coach under Kitchens for 12 seasons.  When asked about the selection, Kitchens  remarked "Handing over the baton to Mika as head coach and Paul as associate head coach is a very pleasant and enjoyable thing for me. They are excellent coaches and they will make the program proud. I am delighted that the Miners will be in such good hands."

From the Official Press Release:

"UTEP track and field will not miss a beat with Mika Laaksonen and Paul Ereng assuming the leadership role from Bob Kitchens," Stull said. "Together they have been a part of the program for nearly two decades.  They have coached numerous national champions and All-Americans, and have a clear understanding of UTEP's storied history and what it will take to maintain that level of excellence."

Laaksonen first came to UTEP in 1992 as a student-athlete and is in his 12th year as an assistant coach.  He was the 1992 NCAA Indoor Champion in the weight throw, becoming Kitchens’ first national champion at UTEP. Laaksonen also took gold in the hammer throw at the 1992 NCAA Outdoor Championships and finished second in the event in 1993.