I'm never going to be one to jump on the morality train when a college athlete is arrested for something.  College athletes are usually 18 year old kids and sometimes those kids will make mistakes.  This time, though, I thought I'd chime in a bit because NMSU's basketball star Jahmar Young isn't an 18 year old freshman who was in the wrong place at the wrong time.  He's a 23 year old man with a history of breaking the law.  And, he's New Mexico State's best basketball player who just two weeks ago announced his intentions to test the NBA waters by declaring for the draft and not hiring an agent.  Young led the Aggies with 20.3 ppg. 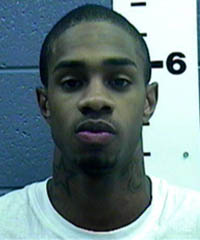 Let's take a look at Young's prior criminal history.  And yes, it warrants a bullet-style list.

NMSU coach Marvin Menzies has to take a stand at some point, right?   If not him, shouldn't athletic director McKinley Boston intervene?  In all likelihood, I don't see them doing anything.  Why?  That's the new status quo in Las Cruces.

Let's not forget that this is the same program that let their power forward Wendell McKines play in a WAC game on the same day he bailed himself out of jail.  Seriously.  Wendell McKines was charged in March '09 with criminal property damage.  He got into an argument, so he kicked a car fender and banged it up.  He was sentenced to pay some fines.  When he didn't pay the fines, warrant was issuedfor his arrest.  A few months later, police were called because McKines and some other Aggie players were allegedly vandalizing a stop sign.  With the warrant there, McKines  was arrested and spent 10 hours in jail before posting bail.   That night, he scored 13 points and had 15 rebounds.  True story.  It's so absurd that Tony Jones of the Salt Lake Tribune to label NMSU a "renegade program."  Who can dispute that if the Aggies don't come down hard on Young?

Now, it's time to wait and see if Jahmar Young will be welcomed back to the NMSU program with open arms.  His already questionable NBA draft stock has already taken an obvious hit (Just ask ESPN).  The ESPN link also posted these comments from Las Cruces Sun-News reporter Jason Groves.

I would like to see NMSU discipline Young in some form or fashion prior to any decision in the courts. I doubt that will happen, but at some point, the university and the men's basketball program has to pick an image and protect it. You can only back your student athletes to a certain point, right? Everyone makes mistakes, but how many mistakes are Aggies fans willing to put up with for the sake of wins?