Losing a guy like Jeff Moturi, and a nice safety valve like Tufick Shadrawy along with him, would hurt any passing attack.  It wasn't until I started crunching the numbers on last season's production that I realized just how much Moturi and Shadrawy did for UTEP last season.  Take a look at Moturi's and Shadrawy's production from last year:

Now, take a look at the numbers for all of UTEP's returning wide receivers combined from 2009.

Moturi and Shadrawy comined for 77 receptions, 1249 yards, and 6 touchdowns.  All of UTEP's other wide receivers combined for 101 catches, 1392 yards, and 8 touchdowns.  Which brings me to the most obvious question regarding UTEP's 2010 wide receiving corps....

Where in the world was Kris Adams last season?

In 2008, Kris Adams broke out and established himself as one of Trevor Vittatoe's favorite, and most reliable targets.  He came within 42 yards of a 1,000 yard receiving season and scored 14 touchdowns.   Last season, Adams was still a popular target, but didn't have nearly the kind of overall game impact that he did in 2008.  Take a look at Adam's career stats below.

So, should we be panicking?  I don't think so.  What was the biggest offensive surprise last season?  That's easy, it was the emergence of Donald Buckram.   When you have a RB come virtually out of nowhere to rush for 1,600 yards and have 21 td's (18 rushing, 3 receiving), someone's numbers are going to come down.  In UTEP's case, it was Kris Adams.

When asked about what he thought Kris could do to get back on track, Mike Price said "the key for Kris is getting a little stronger ... putting on a little bit more weight, but it has to be muscle. He should be tremendous if he stays healthy. He’s running and catching well, he just needs to be a little more physical."

I agree.  Adams playing weight is about 195 lbs.  At 6'3, he could easily get that up to 210-215 and not lose much, if any, of his incredible leaping ability and speed.   The time is now for Kris Adams to assert himself as Jeff Moturi's replacement and UTEP's #1 receiver.  Because, if he doesn't re-emerge, there are several guys with incredible talent waiting in the wings.  Which, brings me to....

UTEP's base 1 back formation puts three wide receivers on the field for a vast majority of snaps.  In goal line/short yardage scenarios, they will often take out the third receiver in order to put in a second TE (Elijah Goldtrap).  Even so, UTEP rotates a lot of receivers into every game and the Miners have several guys coming back with game experience, with varying degrees of offensive production. Look at the chart up top with last season's stats to see who's coming back.  Based on playing time and production in 2008, it's easy to see that Donavon Kemp and Evan Davis are favorites to step up in the fall.

Kemp is a big play guy.  He tied Jeff Moturi for the team lead in touchdowns (4) and averaged 23.7 yards per catch.  His problem?  Consistency.  He emerged early on last season, against Kansas, with 3 catches for 85 yards and a touchdown.   But, despite playing in all 12 games, he only caught passes in 9 of them.  Obviously, with Moturi/Shadrawy gone, he should get more opportunities this season.  He really is one of the most dangerous Miners with the ball in his hands which is evident by his strong showing on kick returns, where he averaged over 21 yards a return despite not being the team's primary return man.

Common sense would say that the wide receiver most likely to come out of nowhere and emerge would be 6'5 Pierce Hunter, speedy Evan Davis, or veteran Russell Carr.  Davis had 19 catches last season.  Hunter has the size and talent to play a huge role in the passing game.  Carr, a redshirt junior, has shown steady progression over the last two seasons and seems to make the most out of his (limited) opportunities.  Even so, I'm making my wildcard Lavorick Williams.

Williams, a 6'2 transfer from New Mexico State, sat out 2009 per NCAA transfer  rules.  The former Odessa Permian star has good speed for his size.  I was very impressed with his performance at the Miners first spring scrimmage where he caught two deep passes for 84 yards and a TD.  In the Miners second spring scrimmage, he caught two more passes for 45 yards.  Williams has the ability to become a real deep threat.  Trevor Vittatoe loves to throw the deep ball, and does so with good accuracy, and I think he and Williams could have a monster year together.

Of UTEP's top 6 returning wideouts, 5 are juniors or seniors.  Kris Adams, Pierce Hunter, and Evan Davis are all seniors.  Accordingly, Mike Price & Co. went out and signed 8 receivers last fall.  The following chart lists each incoming wideout, their size, speed (according to Rivals), and their ratings according to Rivals, Scout, and ESPN. 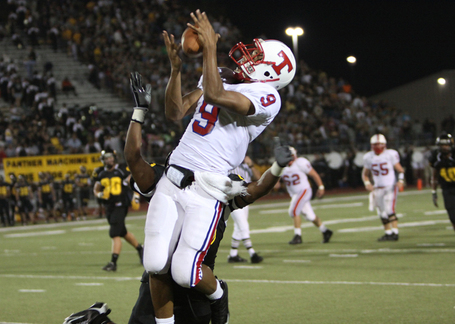 Oh, and Darius can also dunk the ball pretty well too.

I have to agree with Dave Campbell's Texas Football and proclaim the Sleeper of the class at WR to be Mesquite's Davian Harper.  Harper played QB last season at Mesquite and is very dangerous with the ball in his hands.  He's another raw athlete that could develop down the road.