Apologies for this, but it's April Fool's.Day.  Joe Muench was nice enough to recycle his annual "Loof Lirpa" joke too.  Let's get to the real news.

One on One:  Tim Floyd met individually with each player on the UTEP roster yesterday.  Randy Culpepper came out of the meeting fired up for next year on the court and off it.

"Who wouldn't want to play for Tim Floyd?" Randy Culpepper said. "He has an outstanding résumé. I can't wait for the season to start, to start working. He said we would be pro-style -- offense, defense, in the weightroom, individual workouts, everything." Culpepper said he also had another reason for coming back for his senior season. "I'm the first in my family to go to college, and I'm very close to graduating (by the end of the summer or in December)," Culpepper said.

Everybody's Got One:  I'm getting links from coast to coast on the Floyd hire.  A writer in South Carolina decided to offer his two cents.  He disapproves of the hire.

There’s been a long history of coaches involved in shady dealings getting back into the game: Jerry Tarkanian, Eddie Sutton and even more recently John Calipari, just to name a few. But I can’t remember one who took over a Big Dance team before an investigation is complete. If the NCAA finds wrongdoing at Southern Cal, Floyd could go completely unpunished. 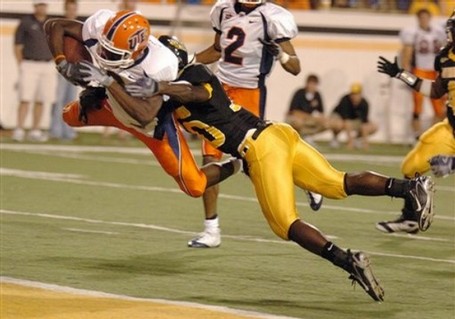 Star Treatment:  Mike Price knows he has one of the nation's best running backs in Donald Buckram.  He's conditioning his coaching staff to develop the rest of the team to help lower Buckram's load.

Another One Bites the Dust:  Dave Dickerson was fired as the head basketball coach at Tulane.  Tulane is the kind of school that expects results without willing to invest in resources.  Nobody can win there right now.

Dickerson, who signed a contract extension in early 2008, had multiple years remaining on his contract. He finishes at the school with a record of 68-84 (31-47 in Conference USA) and never coached the Green Wave into a post-season tournament. Tulane has not participated in the post-season since the 2000 NIT.

Back to Work:  Last week, Donnie Jones was the head coach at Marshall.  Now, he's already signed his first recruit at Central Florida.  He got a point guard that had offers from two Big 12 schools.

Jarvis Davis, a 6-foot-1 point guard at Hargrave Military Academy, told the Orlando Sentinel he committed to the Knights Wednesday night. Davis never visited the UCF campus, but Jones sold him on the program. Davis had offers from Texas Tech, Nebraska, Marshall and Charlotte.

Exciting Time in Orlando:  UCF wants to be in a decent position for a Big East spot once the next conference realignment occurs (which could be tomorrow or next year).  UCF is investing financially in their basketball program to improve their case.

"Make no mistake about it, this is Tribble's defining moment and you'd better believe he will do everything in his power to make sure Jones succeeds," writes the Orlando Sentinel's Mike Bianchi. "This is why UCF basketball fans should be ecstatic: Because Jones will not only get the recruits Speraw couldn't, he will get the support Speraw didn't."

Asserting Himself:  Donnie Jones is trying to elevate the profile of UCF's basketball

Known as a relentless recruiter, Jones already is planning to tour the state and visit as many high schools as he can beginning next Thursday -- something similar to what Billy Donovan did when he was hired at Florida. In fact, Jones said one of the first things he wants to do is set up a game with the Gators next season, possibly at the new Amway Center.

Bust City USA?  ESPN says that the Eagles should be weary of Kevin Kolb at quarterback.  Why?  Houston is known for producing NFL quarterbacks that produced at insanely high levels in college, in a system offense, that couldn't make it in the NFL.  Maybe Case Keenum should read this.

The Philadelphia Eagles are apparently on the cusp of trading Donovan McNabb, a move that makes a steep investment in former Houston Cougar QB Kevin Kolb. Kolb has played well in limited time with the Eagles, but he'll have to overcome a history of University of Houston quarterbacks who put up sparkling numbers in college, but failed to deliver in the NFL.

Dickey also was head coach at Texas Tech for 11 years, and the final four seasons were disastrous. The Red Raiders had four straight losing seasons after being stripped of nine scholarships total in an academic scandal.