The calm before the storm...  Tomorrow is the start to what we all hope will be a beautiful March.  Let's take a look around C-USA, starting on Glory Road!

Just Do It:  UTEP's student body is voting this week on a new athletics fee that will be used to generate revenue for new facilities and coaches salaries.  This is a tough one, tuition has risen drastically at UTEP since Texas passed tuition deregulation, and the fee ($360 a year) is not cheap.  The EPT's Adriana Gomezz has the story.

If approved, athletic programs would get $5 million a year from student fees... The first fees of $240 per student per year would be imposed in fall 2011. By 2013, the fees would rise to $360 a year for students carrying a full course load.

A Motivating Factor?  The Tulsa World's John Klein questions whether UTEP is truly motivated for the C-USA Tournament since most believe they have an at-large bid sewn up.

UTEP has the No. 1 seed and the best team but may not have the motivation at the Conference USA Tournament at the BOK Center. The Miners would appear to be the only team in the league that would appear to have a bid to the NCAA Tournament locked up.

It Would Be Nice:  The EPT's Matt Aguilar thinks a tournament title for the Miners could launch them up to a 4-5 seed.  Right now, the Miners seem to be a consensus 8 or 9 seed.

Still, a good showing in the C-USA tourney this week will ensure a higher seeding -- perhaps as high as four or five if they win the tourney title. The Miners' highest seed came in 1984, when they were a four.

Not Fresh but Rank:  Tuto's Jay Koester has a good Barbee quote on UTEP's fall in the latest AP rankings.  Coach Barbee, like myself, doesn't understand how beating two RPI Top 75 teams can hurt your resume.

"We get two wins against top-100 RPI teams, and we drop. How's that?" Barbee said at today's Conference USA coaches' teleconference.

A Knight's Tale:  Bill Knight has been doing a good job covering UTEP's run.  Today, he discussed the strength of C-USA's top 5.

This league is stronger than it has been at any time since the new makeup of teams. There is no top-five team (like Memphis in recent years), but there are five 20-win teams and, should Southern Miss win a couple, there will be six 20-win teams. At least one of those 20-win teams (either Tulsa or Marshall) will get bounced in the quarterfinals; maybe more.

Championship Game or Pop:  The Blazers last two losses to Memphis and UTEP have really put their backs against the at-large wall.  The Birmingham newspaper goes into some good detail on UAB's at large hopes at this point.

UAB opens the C-USA Tournament on Thursday against the winner of Southern Miss (RPI: 119) vs. Tulane (RPI: 277). There's some thinking by some, including ESPN's Joe Lunardi, that a UAB-Memphis semifinal winner would get an at-large bid. UAB would be wise not to ignore its opening game, though. Southern Miss is capable of dashing UAB's NCAA dreams before they even get to Memphis.

Not So Fast My Friend:  The Hattiesburg American thinks that conference realignment could land USM in the Big East.  I think USM would be much further down in the pecking order than they do.

But USM certainly would bring football credibility and the Big East would be in dire need of solid football programs. ECU, UCF and USM likely have good enough football facilities while Memphis lags in that category.

Desperation Time:  Tulsa's Jerome Jordan is about to play his final game or two in Tulsa.  He intends to make them count.

"It's my final year, and there's no coming back after this," Jordan said. "I have to go out there and definitely lay it all out on the line."

Parity is a Reality:  The bloggers at the Tulsa World think Tulsa has a legit shot at emerging as the C-USA Champion.

Stranger things have happened than TU winning in a field like this. There’s no Memphis juggernaut like in recent years. Just a few solid teams at the top. TU has played well in this tournament the last couple of seasons, and playing in the hometown could provide spark to a team that desperately needs something right now.

On to Baseball and Football Season:  The guys at the Houston Chronicle have really stopped writing about Rice and Houston basketball.  Do you blame them?  Anyway, Case Keenum is good, but how will he do now that everybody in the country knows his name?

Keenum will have an even larger target on his back, as a likely first- or second-team all-American. Not to mention the entirely possible scenario that Keenum could graduate with the dubious distinction of holding all major career passing records, and zero conference championships, competing in a non-major conference. 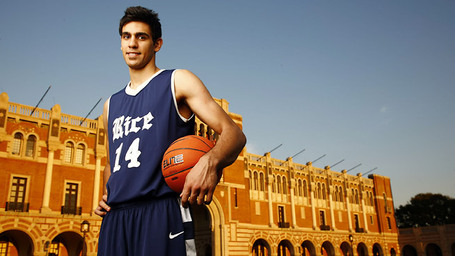 It's Something to Build On: It's been a tough year for Rice.  But, the Owls have found a solid player who can help them improve.