You want more Tim Floyd coverage?  What did Seattle Seahawks coach Pete Carroll say about the hire?  Who doesn't like the hire?  What PAC 10 area newspaper is worried about UTEP poaching their recruits?  It's all in the Dig.

Dissenting Opinions:  Turn Up the Orange's Pablo Villa was highly skeptical of Tim Floyd as a potential candidate for the UTEP head coaching job.  If the NCAA does issue a "show cause" order against Floyd, it won't mean scholarship losses for UTEP.  Similar to what Kelvin Sampson faced at Indiana, Floyd would likely face limits on player contact via in-person visits or telephone calls.  Again, that's only if Floyd is sanctioned individually in the coming weeks.

Floyd’s got way too much baggage. By all accounts, the NCAA is expected to rule by next month on transgressions that may have occurred at USC recently while Floyd was coach there. Could mean scholarships lost.

Sending out congrats to good friend tim floyd for getting the utep hoops job... Great coach & what an awesome hire for them

Good Hire?  USA Today ponders that very question and answers in the affirmative.

So what do you think? Is this a good move for UTEP? Do you think they will continue to contend in Conference USA? (We think yes.)

This could impact the Wildcats’ recruitment of talent in the southwest, including in the state and extending to perhaps L.A. Expect Floyd to continue recruiting the southeast, namely Louisiana, but after coaching at USC for four years, he established a recruiting base in southern California.

The Citizen also  wants to see Floyd get a shot at his former school on a grand stage.

Former UA assistant coach Phil Johnson will likely be reunited with Floyd at UTEP after he was let go at USC by Kevin O’Neill. How about this potential meeting in the NCAA tournament down the road: USC vs. UTEP. I’d buy a ticket.

Cali Connections?  The LA Times reports that former USC player Leonard Washington is seeking a transfer.  The Times thinks UTEP might be a potential destination for Washington.  We won't know until it happens because he isn't too fond of the media. (Hat Tip to Lebowsky Jr.)

Washington joined the team Dec. 23 against St. Mary's. He averaged 6.2 points and 4.4 rebounds in his final 20 games. Midway through the season and for unknown reasons, he stated he would "never talk to the media again. I'll pay fines in the NBA if I have to."

Andy Katz Disagrees:  ESPN's Eamonn Brennan isn't so sure that Tim Floyd won't be punished by the NCAA for the alleged cash payouts involved in the O.J. Mayo scandal.

The question is, assured by who? By the NCAA? Is that even legal? And if not the NCAA, then who? Tim Floyd? Let's say the NCAA does find USC guilty of the charges it's currently considering. How would Tim Floyd -- who, again, allegedly handed O.J. Mayo's handler $1,000 in cash -- not be individually penalized in connection with the situation? How does that work? So Floyd would be able to skate away scot-free, take another job at another school, and coach again like nothing happened? What?

Seal of Approval:  Check out this link for an incredible collection of comments from former UTEP players, national sports writers, and local leaders, on the Tim Floyd hiring. Here's what Tim Hardaway had to say.

"That’s great to hear about Tim Floyd being hired at UTEP. It is a wonderful choice to bring somebody back to the school who knows the community and the direction the program wants to go in. UTEP and El Paso could not have done any better. He is family to me, and I’m ecstatic about his hiring"

McDermott transferred from New Mexico State prior to the 2009 season after throwing a total of only 74 passes his freshman and sophomore seasons. Both quarterbacks will use the spring to begin to improve on last year’s record season and to lead SMU to another bowl game.

A Good Read:  Sam McGuffie was one of the most coveted recruits in the nation before he committed to Michigan to play running back.  How'd he end up at Rice?  Read this article from Sports Illustrated to find out.

After wrestling with the decision to leave Michigan, Sam finally made it after he returned home from a funeral late in the 2008 season. The Wolverines still had to play Ohio State, but McGuffie knew he wouldn't be back. He had decided to come home, because his family needed him. "Sam came back mainly for his family," Victoria said 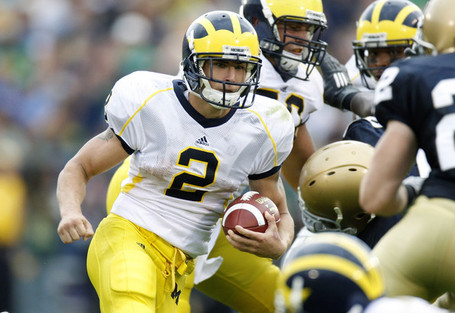 You Sure?  Donnie Jones was doing an incredible job at Marshall before he left for UCF.  Marshall students think he made a mistake.  I think it'll be easier to recruit to Orlando that it was to Huntington, West Virginia.

They say it doesn't take a brain surgeon to realize Jones' decision could be a bad call. "I wish him the best, but I think it's going to hurt Marshall," Jacob Kilgore said.

Not So Fast, My Friend: The Houston Chronicle's Jerome Solomon doesn't think Houston should be in a rush to make its head coaching hire.  Everyday they wait, good coaches come off the market.  Bob Marlin?  Tim Floyd?  Steve Lavin?

There is no shortage of very good coaches available. Not even the April 15 beginning of the spring signing period — when high school and junior college players can sign letters of intent (and the Cougars will need a couple of juco products to be competitive next season) — should make Rhoades rush into a decision.