Notice something different?  A special thank you to Ana at White Lamb Designs for designing these incredible logo's for the Daily Dig.  Incredible work, Ana!  Need a logo?  E-Mail her at whitelambdesigns@gmail.com!

Maybe He Should Have Been Watching Film:  Kentucky's John Calipari called Bob Stull to recommend another former assistant of his, Orlando Antigua, for the open job at UTEP.

Kentucky Coach John Calipari called Stull to recommend Orlando Antigua who has been an assistant coach for Calipari at both Memphis and Kentucky. Antigua is from the Dominican Republic, was reared in New York City and went to Pittsburgh where he was both a player and assistant coach.

"I'm excited," he said after going through his first practice as a full-time coach. "I was nervous with anticipation all day. We had a little bit of a hiccup during yesterday's walk-through with one of the things we're trying to get through to the defense. But our guys are focusing and taking it to heart. They made the coach look good today." 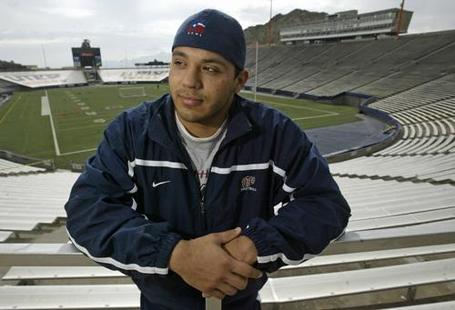 Depth by Numbers:  UTEP's athletic site has some specifics on the experience of UTEP's returning letter-winners.

"This is a great opportunity for Michael Scott," coach Mike Price said. "He made 5-of-7 field goals (Thursday). He was accurate, very accurate. ... He's a very popular kid on the team."

Speed Kills:  UTEP's Blessing Okagbare is already setting the pace around the country in the 200m for the outdoor season.  Blistering speed.

Running the 200 meters with a legal wind, Okagbare's time of 23.23 seconds was the second-best time in the world in this very young outdoor season and the best in the NCAA, letting her pick up where her indoor season ended two weeks ago.

Morris has thrived using a "hurry-up, no-huddle" system similar to former TU coordinator Gus Malzahn. In 2007 and 2008, the Golden Hurricane's offensive attack led the nation in total yards under Malzahn.

Easy Come, Easy Go:  Bill Haisten at the Tulsa World takes a look back at the 1999 Tulsa team that made it to the Elite 8.  The Bill Self days seem like a long, long time ago.

North Carolina was an eight seed and had 13 losses. Ten years ago, TU was as prominent within the mid-majors classification as Gonzaga and Butler are today. In 2000, TU was making its sixth NCAA appearance in seven seasons. In three of those appearances, the Hurricane surged to at least the Sweet Sixteen.

Not-So-Pro Day:  Memphis had their annual pro day this week.  Four of the five participants showed their durability and stamina by not being able to complete the three hour workout due to injuries.  At least Duke Calhoun made the scouts trip worthwhile.

Carlos Singleton on Friday had highlight moments, but were unable to finish the nearly three-hour workout for 15 pro scouts. Steele and Singleton suffered hamstring injuries. Farr and Pitts pulled groin muscles. One Tiger, though, receiver Duke Calhoun, made it through the workout without incident. Calhoun, the school's career receiving leader, ran a 4.4 40-yard dash, impressed in pass-catching drills and earned an invitation from the Seattle Seahawks to visit early next month.

Spring Optimism:  Early reports on spring practice at Rice have been very positive.  Running back Sam McGuffie and tight end Vance McDonald seem to be getting most of the buzz.

Rice running back Sam McGuffie and tight end Vance McDonald were impressive during the Owls' spring game. McGuffie took a dump off 65 yards for a score, and McDonald caught five balls for 69 yards and a score. McGuffie finished with three catches for 75 yards, but only managed 10 yards on seven carries.