Expect more positional previews to roll out this week.

If you aren't familiar with Jones' story, read this excellent article from the Columbus Dispatch.  Jones was set to play for Patterson at UNLV.  But, in the first game of his senior season, he suffered a devastating knee injury.  Patterson kept in communication with him and Jones decided to follow him to UTEP.  Jones has worked very hard at rehabilitating his knee and the Miners could definitely use his size and speed in Patterson's 4-3 scheme.

Thanks to Bret Bloomquist of the El Paso Times for posting this over at the Times site.  Sadly, UTEP's official athletic department website does not include updated depth charts during spring.  So, we don't know who's running with the second team at this point, but should be able to piece it together as more practices unfold.  Bloomquist also reports that UTEP wide receiver Corey Trisby is missing spring practice to focus on academics.

The real news here is that redshirt freshman Germard Reed is getting reps with the first team defense.  As a senior at Lufkin High, Reed was the Co-Defensive Player of the Year in District 14-5A.  From what I've been able to read on Germard, he's athletic enough to have an instant impact. He played basketball for three years at Lufkin. 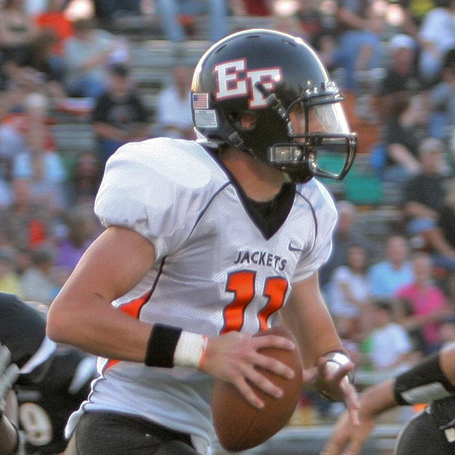 Curry is the only scholarship quarterback on the Miners spring roster.  Rivals ranked Curry the #29 pro-style  quarterback in his class and was considered the centerpiece of Mike Price's 2008 class.  Curry red-shirted in 2008 but didn't receive any significant playing time in '09.  He only attempted one pass, against New Mexico State, and it was incomplete.  Trevor Vittatoe's suspension should allow Miner coaches and fans to get their first real idea of what Curry can do as a starting Division 1 quarterback.