Share All sharing options for: Here We Go Again: Tony Barbee Follows in His Predecessors Footsteps

Don Haskins was an amazing coach.  Why?  Not only did he win a national championship and have consistent success over four decades coaching;  he also valued living in El Paso and building the Miner program.  Bigger schools called.  NBA teams called.  The Bear didn't listen.  Don Haskins was loyal to the school and town that gave him a chance to coach at the D-1 level.  Loyalty like that just doesn't exist anymore. 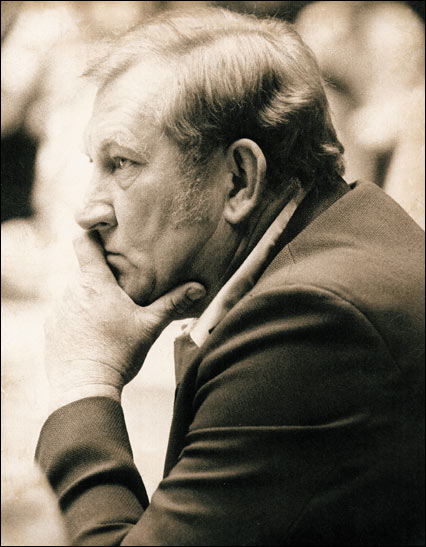 Tony Barbee has left the UTEP basketball team after four seasons in El Paso for greener pastures in the SEC.   I suppose it's the nature of college athletics as we now know it.  Universities that can't afford to pay their head basketball coach $1 million a year, or close to it, can't hang on to a bright, young coach when they are lucky enough to find one.  Including perks, Tony Barbee made just under $360,000 last season in El Paso.  According to Turn Up the Orange, Auburn's previous coach, Jeff Lebo, made about $750,000.  Money talks.  Who needs loyalty when you can double up like that?

Barbee worked hard in El Paso.  He was a master at finding unheralded players that fit his dribble-drive weave offense to a tee.  Now, he's off to a bigger paycheck.  I don't hold ill will towards him, but I'm not happy for him either.  To be honest, I'm just happy he left the cupboard full.  The only Miner who could conceivably leave the team before next season is Derrick Caracter.  Even if he leaves, UTEP will return four of five starters, including 6'11 Arnett Moultrie, three-year point guard starter Julyan Stone, and Conference USA MVP Randy Culpepper.  I'll take our starting five next year over anything Barbee can field at Auburn next season. The key is to hire someone who can pick up where Barbee left off.

Is the Stull Model Working?

If AD Bob Stull has shown us anything, it's that he's capable of finding bright, young, assistant coaches that are capable of winning in El Paso.  Rabedeaux was the 2001 WAC Coach of the Year before he left the program among personal turmoil.  Gillispie took the Miners to the NCAA Tournament before leaving to make Texas A&M relevant in basketball.  Sadler took the Miners to the NCAA Tournament too.  Then, he left to Nebraska.

I have no doubt that Bob Stull already has a short list comprised of some of the nations brightest young coaching minds.  The question is, should he pursue the same course that has left UTEP saying "Adios!" to it's previous three coaches to "name" schools with bigger pocketbooks?  Or, should he seek a veteran coach.  Someone who might be willing to settle down in El Paso, win or lose, for the long haul?  Should Stull be looking for a basketball equivalent of Mike Price?

Let's take a quick look at the most likely candidates to be mentioned for the job right away.

1.  Billy Gillispie:  The former Miner coach left El Paso for College Station before the 2004 season.  He went off to A&M where he quickly built a legitimate Big 12 contender.  A crowned miracle worker, he then bolted College Station to the ultimate college coaching gig:  Kentucky.  After two disastrous seasons in Lexington, Kentucky was replaced by John Calipari.  He reportedly lives in Houston, TX and is considered a front-runner to replace Tom Penders there.  Somewhere along the way, he also picked up a well-reported DWI.  RIght now, he's undoubtedly damaged goods in coaching circles.

Quite honestly, Gillispie brings more questions than answers.Will he be loyal to the school that gives him another shot?  Can he recover from his personal issues and be a great coach again?

2.  Tim Floyd:  Same story as Billy Gillispie only substitute the DWI with possible NCAA sanctions and toss in a few years in the NBA.  Floyd's name comes up just about every time the Miner job opens up, but it never seems to happen.  Floyd, like Gillispie, is damaged goods and hiring him would bring the same questions.

3.  Bob Marlin:  The long-time head coach at Sam Houston State has become a popular name after building a nice, consistent program there.  Martin's squad took Baylor to the edge in the opening round of the NCAA Tournament.  Undoubtedly, his star is on the rise.  He's proven his loyalty, over 12 seasons, to the Bearkats, but might finally be itching to go to a bigger program.  It's not clear if he would consider UTEP enough of a move up the coaching ladder to leave a program he has built from the ground up.

Bob Stull has done an incredible job at UTEP.  He's been instrumental in raising funds for the remarkable Foster-Stevens Basketball Complex.  He's hired coaches that can win in El Paso.  Now, it's time to wait and see if he chases another top assistant eager to get his hands on the keys to his own program or a veteran coach hoping to rebuild a tarnished reputation in a town known for embracing those who need a second chance.  One things certain, we'll never see another Don Haskins again.