Now that we've had some time to get over UTEP's humbling loss to a tough Butler squad, it's time to wrap up the basketball season by handing out some awards.  The First Annual Rushies will roll out starting tomorrow.  Please, feel free to comment on what categories you want to vote on here.  For now, let's take a look around the C-USA!

Barbee the Hawkeye?  Obviously, the eyes of West Texas will be on Tony Barbee to see if he entertains any coaching offers.  Expect his name to come up a lot in the coming weeks.  The guys at Black Heart Gold Pants think Barbee is an intriguing candidate.

As for Tony Barbee, he seems like the most intriguing option of the three. Good recruiter, up-tempo, exciting.

The hot names are UTEP’s Tony Barbee, Baylor’s Scott Drew, Oregon State’s Craig Robinson and St. Mary’s Randy Bennett. Plenty of other names are out there as well.

A Nice Write-Up:  Bill Knight wrote an excellent column that analyzed UTEP's past season of success but also asks "What's Next?"

This UTEP team was a good one, a very good one. It was big and long and deep and athletic and unselfish. Even in their few defeats this season, the Miners were never overwhelmed -- until Thursday afternoon. Butler did it:

Silent Assassin:  UTEP's Blessing Okagabare has been named the C-USA Indoor Track and Field Athlete of the Year.

UTEP’s Blessing Okagbare added more hardware to her collection on Friday morning when Conference USA named the All-American the 2010 Female Indoor Track and Field Athlete of the Year.

Much Needed:  Traffic is going to suffer around campus for the next few months, but the new changes TxDot is making will be great when completed.

The Texas Department of Transportation will need until August to finish the project, which is meant to improve traffic flow by allowing cars to continue through the intersection by using the roundabout without waiting at a three-way stop or a traffic light.

Softball Star:  UTEP's Stacie Townsend recorded her 200th strikeout of the 2010 campaign and helped UTEP beat Memphis.  Townsend is having an incredible season.

Townsend fanned nine batters and gave up four walks to capture her 17th victory of the season. The senior from Orlando, Fla. collected her 200th strikeout for 2010 when she put away Kailey Kassner in the bottom of the seventh. Townsend has recorded 670 K’s for her career.

Justice is Served:  The Memphis Tigers lost their appeal to the NCAA Infractions Committee stemming from punishments related to the Derrick Rose controversy.  Turns out players do have to take their own SAT's.

Last August, Memphis was ordered to vacate its NCAA-record 38 wins from the 2007-08 season and forfeit all revenue associated with its run to the national championship game. Memphis appealed the penalties, but the Infractions Appeals Committee said it found no basis to conclude that the penalties were excessive.

Price said the attraction for him was returning to college coaching after a two-year absence. ''No. 1, I wanted to be a coordinator again,'' Price said. ''And No. 2, I knew about the potential and the possibilities that Memphis has. I always thought this was a good job in terms of a place to recruit to.

Mack is Back:  Former UTEP assistant AD and current Houston AD Mack Rhoades hasn't yet said whether Tom Penders will return to coach the Cougars.  Houston's improbable run to the NCAA Tournament may not have been enough to save Penders job.  The Houston Chronicle takes a look at Penders accomplishments.

Still Playing:  The UAB Blazers are still making a run through the NIT and are incredible excited at the fact that the North Carolina Tarheels will be playing them in Birmingham in the quarterfinal round.

"I don't think North Carolina is going to give us a home-and-home," UAB athletic director Brian Mackin said. "North Carolina is probably considered one of the most established programs in the country, so it's very special for our fans for them to come here."

Will He Go?  The LA Times has Hassan Whiteside listed as the 6th best prospect in the 2010 NBA Draft.

6. Hassan Whiteside, 7-0, 235, Fr., Marshall: Marcus Camby-style shot blocker with game. Question is why he was off radar in high school. 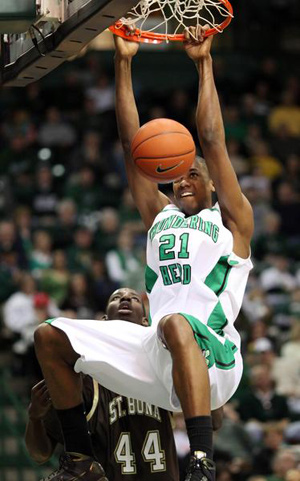 New Mexico State certainly seemed deprived of an opportunity to beat Michigan State at the end of a curious 70-67 loss in Spokane on Friday. Down two points with 17 seconds to go, NMSU's Troy Gillenwater was called for a lane violation after a missed Spartan free-throw attempt. There is little question as to whether the infraction occurred. It did, but only by a smidgen. Rarely is such a violation whistled in a game of such significance. And it's rarer still for it to be called with 17 seconds to go and the game on the line. A tough way to go out.