Mini-Dig: On the Brink of Madness Edition

Share All sharing options for: Mini-Dig: On the Brink of Madness Edition

Madness is in full swing, #6 Notre Dame just went down to #11 Old Dominion and Florida and BYU are in double-overtime.   If you are at work right now, my condolences.  Try these nearly fool-proof excuses:

1)   The Old Work From Home:   "Boss, it's going to take some time to review these files, I think I'm gonna work from home."  Be sure to walk out with as many large files/folders as possible.

2)  The Chax:  "Boss, Don't know what I was thinking, but I ate Chicos for lunch today.  My goodness, I never eat there anymore and it's just not sitting well."  Every one of us has been there, might as well cash it in and make it work for you.  Note:  This is why you keep an empty Chico's drink cup in a drawer. 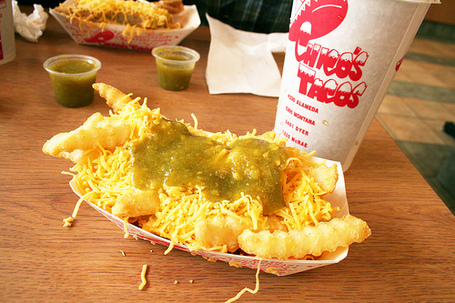 3)  The Hail Mary:  "Boss, what do you say we run down to Cinci and catch the first 10 minutes of the game."  Honestly, the Hail Mary is a gamble, but chances are your boss doesn't want to be at work either.   So, if you get the vibe he/she wants to watch the game too, just go for it.  The clincher:  Buy the first two rounds.   Two beers in and nice weather= no chance you're going back to work.

Now, that that's out of the way, I wanted to pass along some more pregame links for those of you that can't get to a TV set today.

A Household Name:  One things certain, Derrick Caracter is the biggest name to wear a UTEP uniform in a very long time.  DC is making headlines from coast to coast, literally.

The Louisville Courier-Journal:  Derrick Caracter played in an Elite 8 with Louisville.  He still wears the ring he earned that year, and now he wants to help his new teammates get one of their own.

The ring isn't a bittersweet reminder of Caracter's time with UofL, he said. "I want to let everybody know what we're shooting for," the 6-foot-9, 275-pound junior said. "We want to surpass the Elite Eight — a Final Four, a championship, whatever God leads us to.

The Associated Press:  The AP thinks DC could emerge as a Stephen Curry like March Madness star.

The Associated Press has some candidates to keep your eye on as the tournament begins, from UTEP's Derrick Caracter and Houston's Aubrey Coleman to Siena's Ronald Moore and Cornell's Ryan Wittman.

The Washington Examiner: The Examiner has identified some unheralded stars who have the potential to be March's biggest difference makers.

Derrick Caracter, UTEP, Jr., 6-9, 280 — Randy Culpepper was the Conference USA player of the year, but Caracter made the Miners an inside-out team after transferring from Louisville. He's a lane-clogger who can be a game-changer.

Respect:  I like that Tony Barbee is playing up the "No Respect" angle in the press.  The team should feed off of that.

Many have UTEP picked in the early game to pull the upset, considering that the team might be underseeded. "I was a little shocked by the seeding we got," UTEP coach Tony Barbee said. "I thought we had a season that deserved a little more respect."

Past Glory Revisited:  The Houston Chronicle has a nice article on UH's run and reminisces about past Cougar glory.

This year's squad, led by Aubrey Coleman, the nation's leading scorer, certainly is not in the same league as those past powerhouses. But the team has likely already saved its coach's job. Tom Penders, in his sixth season at the school, had been rumored to be on his way out. Instead he's basking in congratulations from UH Chancellor Renu Khator and is now the ninth coach in NCAA history to take teams from four different schools to the NCAA playoffs.