The countdown to UTEP's NCAA battle with Butler is winding down.  If you're working, it's time to start faking symptoms.  If you can't pull a Bueller, Miner Rush will have today's games embedded on the site directly (compliments of CBS Sports).  There is tons of national love pouring in for the Miners, let's take a look!

The Main Caracter:  Derrick Caracter is receiving tons of media love from across the nation.

The New York Times:  Pete Thamel has a nice piece on the way Derrick's been perceived by his coaches since junior high school and how he has matured in El Paso.

"You can’t change or turn like he has if you are a bad person," Barbee said. "You can’t. You are what you are."

Yahoo! Sports:  Matt Romig also got into Derrick's maturation since his troubled days at Louisville.

"I’m thankful for the opportunity being back in college basketball," Caracter said. "Just to be able to show my talents again."

ESPN:  Diamond Leung has some nice quotes from Tony Barbee on how Derrick has shaken the "lazy" label that he was branded with at Louisville.

"Once I heard that he wasn't blaming anybody else, he knew it was his fault, and he knew he had to change. Knowing he was a good kid from recruiting him from before, I thought he had a chance to turn a corner. He's grown up. He's matured. He's shaken that lazy label since being around me. Everything I've seen, he's been one of the hardest workers on our team."

The Sporting News:  Ryan Fagan thinks the difference in the game will be UTEP's size advantage.

When the tournament starts Thursday, the rest of the country will get a glimpse of why T.J. is so excited. These Miners are really good, and their frontcourt—starters Caracter (6-9, 275), Williams (6-7, 215) and Arnett Moultrie (6-11, 235)—has the ability to dominate; that is, "If we use it the right way," UTEP coach Tony Barbee said.

Butler vs. Texas-El Paso. Can the fifth-seeded Bulldogs fluster the Miners like Houston did in the Conference USA title game? The Cougars definitely showed Butler a plan -- but unless they contain Derrick Caracter in the post, then he and Randy Culpepper could explode. But it's hard to get the Bulldogs, winners of 20 straight games, out of their comfort zone.

West Side:  The LA Times also has some thoughts on the UTEP-Butler matchup.

Butler (28-4) vs. Texas El Paso (26-6): UTEP is much better when it can force an up-tempo game, and Butler likes to keep it slow. Butler has to be worried about UTEP's size.

Local Flavor:  The EPT's Bill Knight has done a good job covering UTEP's season.  He has a nice article up on how Tony Barbee has pieced together this transfer filled team and molded them together.

"That's one of the things we try to do," Barbee said. "Get guys who have won. There is no question success breeds success. This team is successful because these guys are all unselfish. When your better players are the most unselfish guys on your team, everyone else buys into it, too." 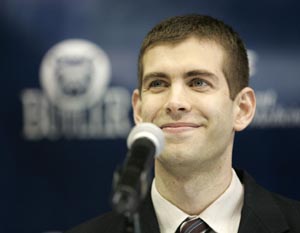 The school's latest hot-as-July coach is Brad Stevens, who won't be around for long. Come on, it's Butler. As warm, fuzzy and successful as the program and its fieldhouse have become, Butler is a stepping-stone job.