Know Your Enemy: The Butler Bulldogs

Share All sharing options for: Know Your Enemy: The Butler Bulldogs

Early tomorrow afternoon, the UTEP Miners take on the Butler Bulldogs in the opening round of the NCAA Tournament.  The Bulldogs are ranked #8 in the ESPN/USA Today Coaches Poll and #11 in the AP Poll.  Butler, like UTEP, isn't on television a lot.  Butler is one of those teams that always seems to not only be in the tournament but one of the teams that pulls an upset or two before making their exit.

My main concern going into tomorrow's contest is overconfidence.  No, I'm not worried about the Butler overlooking the Miners.  The Bulldogs are a veteran team, with extensive tournament experience.  They know the importance of taking every game they play seriously.  There is a reason why Butler didn't slip up one time in Horizon League play and take the nation's longest winning streak (20 games) into San Jose.

I'm worried about UTEP being overconfident.  Why?  Didn't the Miners just suffer a humbling loss to a team that couldn't even get a bye in the C-USA Tournament?  Yes, but despite the Houston loss, the UTEP-Butler game has been portrayed as the most likely 5-12 seed game to end in an upset.  Seemingly every national media outlet, Yahoo!, CBS, ESPN, and CNNSI, has anointed UTEP not as a potential but a likely Cinderella squad.

To make things worse, a likely second round game against Vanderbilt has most pundits automatically expecting the Butler-UTEP winner to advance to take on Syracuse in the Sweet 16.  Projections and preview are the name of the game in March, but the flood of positive press coming UTEP's way has me cautious about their focus in the first round. 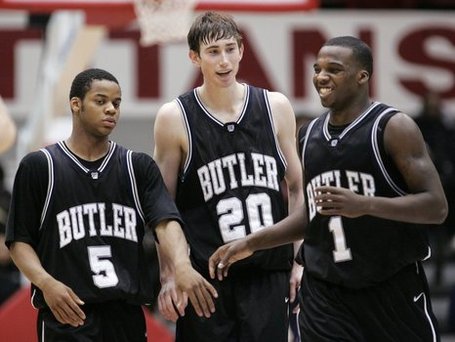 I'm anxious to see if Tony Barbee puts Arnett Moultrie of Jeremy Williams on Gordon Hayward, but in my mind, this game will be decided by whoever dominates the glass.  Both teams have excellent guards, and both teams have shooters capable of taking over a game, but if the Miners want to advance to the second round, they will need Derrick Caracter to dominate the game inside. Howard isn't a great athlete, but he plays tough defense and is a very scrappy player.  Perhaps the biggest mark he can have on the game is drawing cheap fouls on Derrick who has been absolutely plagued by foul trouble over the last several games.  Derrick needs to be on the floor 30 minutes, not 20.