Houston pummeled Memphis.  UTEP survived.  Tulsa is traveling to Duke tonight on ESPN.  Let's take a look around the league: From El Paso to Orlando! 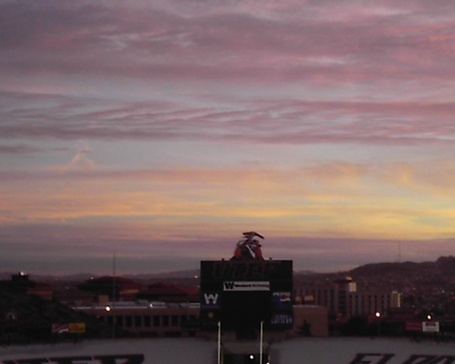 Joe Don't Know Eagles:  Joe Muench is very disappointed in UTEP's effort on the road last night against Southern Miss.  I get the sense Joe looked at USM's record and figured it should have been a blowout.  Sometimes, if you dig a little deeper, you can find out that USM has been playing ferocious defense and has been in dogfight after dogfight over the last month.  At this point in the season, any win on the road against a team like that is a good win.

UTEP entered the game having played well to achieve the No. 25 ranking in the Coaches Poll, and got enough votes to be No. 26 in The AP rankings. But you don't almost blow a 14-point lead late in the second half and figure you can win a round or two when the big 64 get together in the NCAA Tournament. UTEP has to be a lot tougher, and the Miners have not really shone they can be.

Hot Ticket:  Turn Up The Orange's Jay Koester says if you want to see UTEP play against Rice or UAB, you better get your tickets now.

A New Weapon to Watch:  UTEP recruit Nathan Jeffery is a touchdown machine.  In the coming weeks, probably after basketball season, I Intend to profile each of UTEP's recruits from the 2010 class.  For now, I will definitely link you all to the articles that come my way concerning them.

Texas-El Paso is landing a football player who certainly knows how to score touchdowns. Caddo Mills senior running back Nathan Jeffery, who signed on Wednesday with the Miners, scored 136 touchdowns in his four-year varsity career with the Foxes to finish second on the all-time state list.

Bye Bye Bubble:  Memphis got waxed by the Houston Aubrey Coleman's last night.  Josh Pastner couldn't believe the poor effort by a team struggling to get back in the at-large picture.

"Unexplainable, the way we played tonight," Pastner said. "We were lethargic from the beginning. It wasn't one guy; it was everybody. We just struggled, really struggled. I don't think anyone played a positive game."

Bad loss for Memphis as it attempted to be an at-large team. Now must win CUSA tourney.

Where Did That Come From:  The nation's leading scorer put up 34 more last night against Memphis.  Is was the first time that Houston has beat Memphis in their last 12 attempts.

Perhaps the even more surprising development on Wednesday was the Cougar men's hoops squad dusting the Memphis Tigers from start to finish at Hofheinz Pavilion, finishing with a 92-75 victory.

The Boot:  Houston coach Kevin Sumlin booted two of his finest off the team yesterday for violating team rules.  A.J. Dugat was a Parade All-American coming out of high school  Now, he's looking for a new team.

University of Houston football coach Kevin Sumlin has dismissed wide receiver A.J. Dugat and offensive lineman Ari Tatum from the team. Dugat, a Parade All-American from Dayton, was the most high-profile member of Sumlin’s 2009 recruiting class...

The Crazies Go C-USA:  Tulsa has a late-season non-conference game against #5 Duke tonight at Cameron Indoor Stadium  A great opportunity for Tulsa to earn some respect for the league.  Too bad, they've been struggling immensely the last few weeks.  The Tulsa World's John Klein still believes Tulsa has a shot.

No one is saying TU is on the verge of a stunning upset of the Blue Devils. Tulsa's slump of late — losses in four of its last five games — would seem to indicate the Golden Hurricane is even less likely to pull off an upset now than it was when this game was scheduled.

Coack K is Rallying the Troops:  Duke's Hall of Fame coach is going out of his way to make sure the Crazies are in rare form when they welcome Ben Uzoh and Jerome Jordan to town.

Duke's nonconference game Thursday is its last home game until the regular season finale on March 6 against North Carolina. "The last game of the season is a long way off," Krzyzewski said. "You don't get better just by preparing for that game. You get ready to be at your best by preparing for this game on Thursday night."

Give Em' a Shot:  TU essentially scheduled this game to provide Ben Uzoh and Jerome Jordan with a national stage to showcase their potential NBA talent.

Tulsa coach Doug Wojcik heard about Jordan from a friend, visited him and came away impressed with Jordan's raw physical skills and intelligence. At Tulsa, Jordan has blossomed. He's averaging 15.2 points, 8.6 rebounds and 2.6 blocked shots per game for the Golden Hurricane, who will play at No. 5 Duke on Thursday.

Win or Lose, it's Gonna be Fun: It's going to be a wild atmosphere tonight.. should be fun to watch.

TU may not be an ACC rival — and some of those living in "Krzyzewskiville" may be waiting for North Carolina's appearance in nine days — but the Duke students are college basketball's ultimate sixth man and will be hungrily cheering for the school's 77th straight home nonconference victory in Thursday's 6 p.m. contest.

Fried Rice:  The last thing Rice needed was a visit from Hassan Whiteside and the surging Marshall Thundering Herd.

The Owls missed nine shots inside of 10 feet in the first half. The downward spiral continued in the second half as Rice floundered from the free-throw line, eventually finishing just 10-of-28 from the charity stripe. "How can we come off two really good practices and not play how we practiced?" Braun said. "How do you explain 10-for-28 from the line? I haven't seen that before.

The Land of Second Chances:  ESPN's Dana O'Neill examines how C-USA has become a league for embattled coaches to get their stripes back.  It's a good read...

"I was dealing with the funk of not just losing my job but then watching those guys, my guys, go on and win a national championship," he said. "Plus, there were people there that knew me intimately, and I knew them. It was really bad for a while."

Spring is Drawing Near:  Scout.com takes a look at all of the C-USA teams going into spring practice.

UTEP:  Lookback & Lookahead,   In Donald Buckram, the Miners return one of the most exciting and productive backs in the country from a year ago. Without much warning, he exploded for 1,594 rushing yards and 21 total touchdowns, striking fear into opposing Conference USA defenses. Assuming QB Trevor Vittatoe regroups from last season’s sudden retreat, he and WR Kris Adams will once again form a dangerous pitch-and-catch combo. That degree of balance has not been commonplace in El Paso since Mike Price arrived.

HAVE A GOOD LINK, PICTURE, OR VIDEO?  Fanshot it.