Techno Friday: What New Gadget/Invention Could You Not Live Without on Gameday?

Share All sharing options for: Techno Friday: What New Gadget/Invention Could You Not Live Without on Gameday?

Authors Note:  Once again, the good people at Samsung were nice enough to sponsor this post.

Last week, we discussed how technology is changing the way fans discuss and interact with their favorite sports teams.  This week, I wanted to focus on some of the incredible new devices, gadgets, and services that I absolutely can't live without.  If anybody out there has a tip on a new device or gadget that we should all have, please share it wish everybody.  I'm always looking for new things.

On gamedays, there are several things that weren't available 5-10 years ago that I simply can't live without now.

I'm amazed that some people still don't have the DVR.  Usually, when I talk to people who don't have one, they say that they don't need it.  I used to say the same thing about cell phones in 2001.  Five minutes with it and you'll never look back.  I have AT&T Uverse at home and I have all the game channels synced as "favorites."  Namely, ESPN1-whatever, the networks Fox Sports SW, the Big 10 Network, Versus and TNT/TBS.  Even with all of them connected that way, I need the ability to record 1-4 shows at any given time.  I can't stand picture in picture, but I love that I can pause a game, switch over to another, come back and see that the first game is still paused.

If you have U-Verse, get this app now.  It's free.  Ever been out running an errand and you realize you didn't set the DVR?  With his app you can access your cable at home, set the DVR and miss nothing.  How awesome is that?

There are obvious apps you have to download, like ESPN Scorecenter and CNNSI's Mobile App.  Those are free, but for a few bucks I recommend the ESPN radio app.  I like listening to Colin Cowherd, Scott Van Pelt (the big name ESPN radio guys) but this app is awesome because it lets you access local radio in larger markets.  Miner fans living outside the 915 can only dream of a KROD app with this interaction someday, but now, you can listen to ESPN Dallas and others the Monday after the Cowboys lose a game.  No medium, in my opinion, can capture the true heartache or frustrations or glory of a fan base quite like local sports talk radio.

Also, if you use Yahoo! for fantasy football, you have to get the new, updated App.  You can set rosters, do pretty much everything you need.

Everyone of us has one.  A buddy who wants to host the watch party but has this in his place: 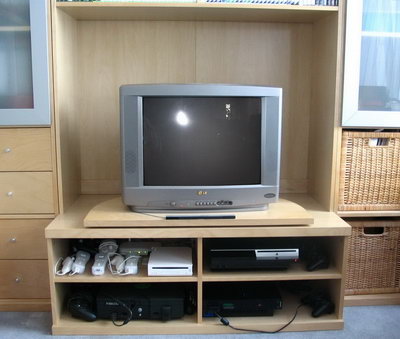 This just doesn't cut it.  Even a good HD tv that doesn't have an HD feed doesn't cut it.   Having an HD TV and not paying the $10-$15 for HD service is like slapping technology in the face.  Suck it up, it's a movie ticket.

Anyway, I'd love to hear of any tech recommendations you guys might have.  These are kind of obvious, so let me know what I'm missing- especially among apps because there are some great ones out there.